ProSiebenMaxx is currently airing the fouth season of The Outer Limits and there are fivefour very important things I've realized:

1.Most episodes are a sci-fi fan's dream coming true. Aliens, spaceships, time travel, aliens, and some really great and well-thought-out plots. <3 Nothing is as it seems and there's always a lesson to learn.

3. I want some of the episodes to become a series. The ideas are brilliant and I love the characters and WHY IS IT ONLY ONE EPISODE?

4. At the beginning of the episodes I'm all

5. I'm shipping practically in every episode a few couples. O_o It's not my fault, the writers do seem to pair them off. Nu-uh. *lalala*

Most of the time I forget the series is from the 90s but then there's a special effect that looks so terrible cupcake-wrapper-on-flashlight and I end up facepalming and rolling on the floor laughing. Thankfully the great acting and the well-written storylines make up for them. :D

Too bad they are only aired on the weekend but at least then I'm not missing them due to real-life interfering. ♥

One thing I've learned on Saturday:

When it comes to snowball fights, all bets are off. Family means nothing and little sisters turn out to be the devil in disguise.

IT WAS HELL, FROZEN HELL BUT I REGRET NOTHING.

(At this rate I'll be posting about my Adventures of Shopping/Random Stuff I Come Across every other week or so. Heh.)

My favourite song (again) now that the rest of the world discovered them too. :D

Rating: NC-17
Word Count: ~3600
Genre: Hurt/Romance
Summary: After Finn's death, Clarke is hiding in the bunker. It's Murphy who finds her and things unravel from there. (Post-Ep 2x08.)
A/N: Well, would you look at that. This was supposed to have minimal plot and more smut. Now it's more like plot, smut, plot, fluff-ish. And it's Murphy/Clarke. That couple is one of those crack-ships that just hit you out of nowhere... xD
Archives: LiveJournal | FF.Net | AO3

(OMG, that show is making me ship them all. *flails* Though Bellarke will always be my OTP. xD)

Sisters and I were shopping today and of course found our way to evey reader's paradise...A BOOKSHOP! \o/

For my sisters it was the usual young adult genre. The Divergent and Edelstein trilogy. I'll probably 'brorrow' them at one point or another. ^^ 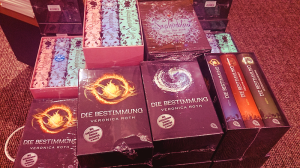 I found myself lost in the sciene-fiction and fantasy section. ♥♥♥ (Thrillers were looked at but not purchased today because knights and aliens totally overrun the competition. :P) 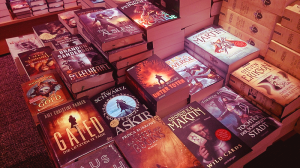 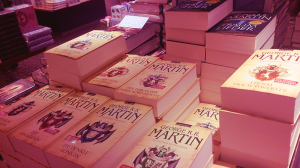 The problem we all had? HOW TO SELECT WHICH BOOKS TO BUY AND WHAT TO LEAVE BEHIND. *breaks down and cries*

(At least those we didn't buy will still be there next week, so...SHOPPING SPREE 2.0 here we come. xD)

Three days. Three days and it feels like it's been six. Or more.

WHY THE HELL DO CERTAIN GOVERNMENTAL INSTITUTIONS NEED ALL THEIR PAPERWORK DIGITAL AND THEN PRINTED TOO? Do I look like I have time for that nonsense? DO I?

I'm drowning in a sea of pages and am THIS close to shoot them all to hell. Very much so.

I wish I had Eve for handling stuff like that... xD

The first is Pharaoh, one of those isometric city-building games. It was my very first pc game back in 1999 and I remember loving playing it. All those tiny people running around and trying to please me...well, until I forgot to throw parties and the gods got angry. Oops.

The second one is Technomage, a German developed role-playing video game but even back then I played both versions (German and English) because it helped me to learn to speak English (at least that's what I told my mom). The different worlds are really beautiful, even though they're not as HD as these days, and the quests are sometimes not as easy to solve as you would think at first. :D

My favourite though is and always will be Arcanum: Of Steamworks and Magick Obscura, also a role-playing video game with an incredible open game world that I haven't managed to see all of it yet. I love the whole world layout and you can literally get lost in it and forget about your main quest. You have the choice between good and bad decision, and you never know how it's going to effect your journey until much later (when you're so bad that no ones wants to speak to you, you're screwed. Damn. I did better the second time around...) It's an amazing game. xD
Collapse